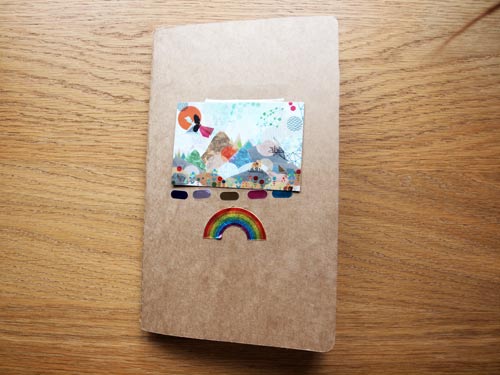 I’m taking part in the Sketchbook Project 2011 over at Art House Co-op. All have to do is sign up for it (pay a fee) then you can choose your theme or let them select a random one for you. Simply fill it up with some lovely stuff or alter the cover, whatever, then send it back to them by January 2011. They do a tour of it around America so lots of pop up exhibitions basically which is great although you don’t get it back which is why you need to document each page.

I signed up for it last year although I never had the time to do so I ended up using the Moleskin for myself, can’t let it go to waste haha.

The theme I picked was ‘……You’d be Home By Now.’ I’m not much of a narrative person (you can probably can tell by now) so I thought this would be a great project to get stuck into.

So my idea for the theme was to continue with the Landscape and Dream idea and the story would centre around a bear’s journey going back home. Pretty simple huh? But I think what’s pretty cool about it is that I’ve not actually planned it out from the very start to the end like who he meets, where he goes, it’s almost like a mini adventure for me too. I’m kinda letting the bear take the lead and depending on which direction it goes I’ll make the image.

As bears lead a solitary life for the rest of their adulthood I wanted to explore that and how he interacts with other animals along his way or meeting other bears. I didn’t give him a name as I wanted to be an observer. You can see more of the images on my profile page.